Stress and the city 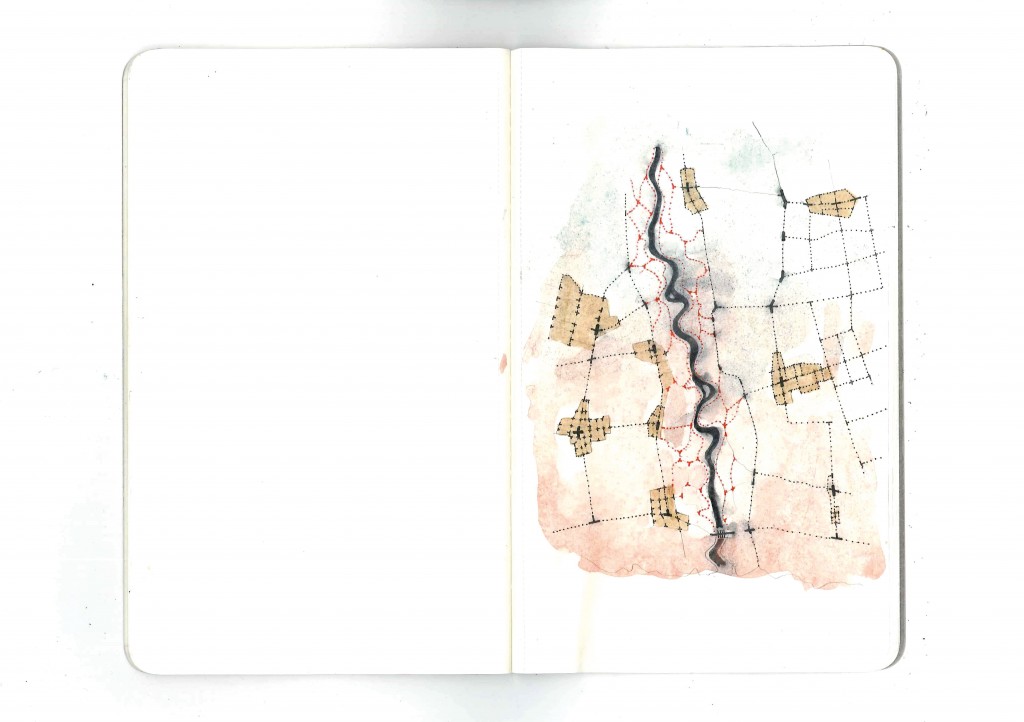 Towards a Territorial City.

The case of Craiova, an Eastern European Mid-Size City

The territory is a palimpsest (Corboz 1968), a complex unfinished story encoded in morphology and in society. By exploring future images and scenarios the project seeks to support social and ecological integration in the fragmented territory surrounding Craiova city. At larger scales, the valley section (Geddes 1909 in Welter 2003) and the two network strategy (Tjallingii 2015) inspire the definition of the valley system as a complex carrying structure for the territorial project.  A new system of relations is designed upon the common grounds between the city and its natural and rural surroundings along the Valley of Jiu River. The project explores the definition of territory through precedent projects and elements that define it: the limit, the core and the main systems in relation to limits and cores. Existing networks and structures are re-used to scaffold (Forgaci, Alexandrescu and Ionescu 2015, 2016) a common territory and a new system of relations between Craiova city, natural lands and rural units. The limits and the trajectories to the cores are used to settle the scaffold. The condition of limits is gradually discovered from an administrative, morphological and topological perspective. Limits are discovered to be a cumulation of drosscapes (Berger 2006), porous and permeable lands (Secchi and Viganò 2009). By designing on limits and trajectories to the core, a polycentric model is encouraged, consolidating local identity as well as exchange with the wider territory. Territorial limits become themselves a scaffold to regenerate the cores.

Three principles guide the construction of the scaffolding on site: porosity, permeability and correspondence. The research by design uses a gradient of scales, while the project is finally revealed at three main scales: the valley scale, the image scale and the project scale. This thesis sets two main goals: to explore common grounds between practice and theories regarding territorial projects and, by setting this provocation, to provide a grounded design strategy, which would support social and ecological integration.

The reports can be found here. A world of acquaintances; how spatial patterns on various scales can form an integrated strategy to facilitate collective efficacy in Beverwaard

My graduation project tries to find a spatial answer to a society shifting from the welfare state towards a participatory society. How can we as planners and designers facilitate participation on various scales? Design as a mediating instrument

‘The thesis addresses a research and a design practice on urban design in the complex urban networks with multiple actors involved via an inspiring Italian case. It is about how urban design performs as a mediating instrument in the process.’ A reclaimed position for sport- and activity structures in the immediate living environment. A design study for Alkmaar West.

Nowadays various Dutch cities have a very programmatic arrangement in which sport and activity structures often are situated at the borders of the city, along highways and railroads, as mono-functional complexes and stand-alone islands enclosed by greenery. The graduation project ‘Sport in Public Space’ is a design research that looks for ways in which sport- and activity structures can be repositioned and integrated into the direct living and working areas of the city. Towards the Empowerment of the Deprived.

This thesis is aiming for proposing spatio-functional interventions, which facilitate the promotion of the socio-economic status of the deprived neighborhoods of Rotterdam South. Living with the others.

Spatial transformations towards liveability of cities of social diversity: the case of the Schilderswijk, The Hague.

The present thesis project uses the idea of a clear demarcation between public and private space as the key element to deal with the conflicting social environment of the Schilderswijk, The Hague. The project is approached and illustrated in various scales; from neighborhood scale until the level of the residential entrances. Main aim of the project is to show how a clear territorial structure in a neighborhood scale, enriched by the qualities of diversity of both the urban form and program can increase tolerance among the various ethnic and age groups, cover people’ needs and finally construct a more liveable environment for all.

The main goal  of this graduation project – based on the desire to create a resilient urban environment -is to prevent the city of London from flooding, retrench the pressure in existing areas and to reduce the need for the «super sewer». Moreover the phases of transformation from existing space to a new form, function, or facilities are investigated. In this case the aim is to illustrate how adaptable existing urban fabric can be. This adaptive urban fabric contributes to more attractive and vibrant street life, therefore the project makes the city not only resilient, but also an even more interesting place. The adaptive character of urban environment can be best compared with a water park – some elements are used to transport water, others are used to store water, but they work as one system.